The Secret Life of Dr. Demented 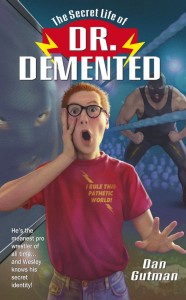 It didn’t seem possible that it could get any louder in the Astrodome. But when Doctor Demented stepped into the spotlight, the place nearly exploded with noise. Grown men put their hands over their own ears while shouting his name. Some young children, who were up past their bedtimes and shouldn’t have been there in the first place, began to cry. The noise was just too intense for their delicate ears.

On either side of Doctor Demented, roman candles were ignited and shot majestically into the air. Giant sparklers sent showers of sparks on and around Doctor Demented. He didn’t flinch.

Multicolored lasers swirled pinpoints of light around the Astrodome. Smoke machines poured out artificial fog until a layer of it filled the path leading from Doctor Demented to the ring. Purple spotlights gave the arena an eerie, otherworldly glow.

“It’s him!” Wesley Brown marvelled. “Doctor Demented!” Wesley and Jimmy had been serious wrestling fans for several years. They read all the magazines, rented the pay-per-view specials, bought the T-shirts and other memorabilia. But neither boy had been to a professional wrestling match in person. They were in awe.

Doctor Demented stood rock solid in one spot. He let the emotions of the crowd wash over him.

“I hope you choke on some poisoned food and die, Doctor Demented!” a lady screamed into a bullhorn.

“Marry me, Doctor Demented!” hollered another.

Even from their distant seats, Wesley and Jimmy could see the huge muscles that seemed to be trying to push right through the man’s skin. Doctor Demented was even bigger than Captain America. His shoulder muscles were so built up that it looked like he didn’t have a neck.

“He is cut, man!” Wesley declared. Jimmy knew what his friend meant, but his dad did not. They explained that being “cut” meant that your muscles were sharply defined, as if your body was chiseled out of stone.

Doctor Demented’s costume was basic black. Black trunks. Black boots. Black mask that completely covered his head except for his eyes, nose, and mouth, like a ski mask. It was made from leather. He looked positively evil. Doctor Demented held a cordless microphone in his right hand. Slowly, in a voice that sounded like death itself, he spoke the words he used every time he stepped into a wrestling arena. The crowd recited those words with him… “I…RULE…THIS…PATHETIC…WORLD!”

The crowd erupted in another earsplitting burst of boos. It sounded like a jet engine revving up.

“Shut yer stinkin’ mouths, ya losers!” Doctor Demented shouted at the crowd. “Erica America is my woman now, and I’m gonna keep her! Right, baby?” A gorgeous woman with dark hair and a low-cut red dress ran out and wrapped herself around Doctor Demented. That made the crowd scream even louder. Doctor Demented waited a few seconds until he could be heard.

“I don’t think so, Doctor Demented,” boomed Captain America from the ring. “At the end of the evening, Erica will be with me. And you will come to me and bow before me. No, more than that. You will get on your knees and beg for my permission to allow you to exist. Because if Doctor Demented doesn’t beg, Doctor Demented is gonna need a real doctor, real bad.”

“I get on my knees before nobody,” replied Doctor Demented. “You hear me, Captain Kangaroo? When I get through with you, you’re gonna wish you never existed!”

The two men went at it furiously for the next few minutes. Chokeslams. Moonsaults. Jackhammers. Combinations. One wrestler would have the advantage momentarily, then his opponent would battle back until he was on top. Several times the referee reached a two count, but each time the man on the bottom would kick his way out of it.

The crowd was roaring, screaming, exploding emotionally with each violent blow.

“Oh no!” Erica America shrieked into the microphone every time Captain America took a hit. “Stop hurting my husband!”

After a few minutes of fast-paced action, Captain America gained the upper hand. He had Doctor Demented face down on the mat, and he was sitting on his back.

“Kids,” Captain America exhorted as Doctor Demented lay on the mat, “Don’t try this at home.”