Home Book Excerpts Back in Time with Thomas Edison

Back in Time with Thomas Edison 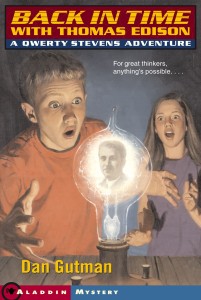 A door opened and a man strode into the room. He didn’t look like Thomas Edison. At least, he didn’t look anything like the photos Qwerty had seen of Edison. This man was much younger. He was handsome, about five foot eight, with soft, straight dark hair that was starting to turn gray. It flopped down over his forehead and he brushed it back with his hand.

From the way he walked into the room and the way the workers looked at him, it was obvious that the man was the great Thomas Edison himself.

To sum up Edison’s appearance in one word, it would be “disheveled.” There were grey smudges on his black suit and pants. Underneath the suit he was wearing a dark vest and wrinkled white shirt. His bow tie was crooked and loosened. He carried a cigar, which he hadn’t bothered to light. His posture was slightly stooped. His complexion was pale. He didn’t look like he spent a lot of time outdoors.

But Edison was alive. He whipped around the room like a tornado, stopping to peek over the shoulder of one worker, to ask a question of the next one, and to issue an order to the next. He seemed to be working on a dozen or more projects at once.

Edison looked up and noticed Qwerty staring at him.

“You, boy,” Edison barked before Qwerty could say a word, “I’m not paying you to stand there gawking. Get me four ounces of nitrous peroxide!”

Qwerty was paralyzed with fear and awe. Edison’s steel blue eyes bore in on him. The eyes were bleary and tired, as if he hadn’t had enough sleep, but they also seemed to crackle with energy.

Edison came over to him. Qwerty could see the man’s yellowed teeth, the stubble on his chin, and the dandruff on his shoulders. Qwerty tried to speak, but his mouth couldn’t seem to form any words.

“Why do you fix me with that vacuous stare of incomprehensibility, young man?” Edison demanded. “Nitric acid! Is that within the scope of your understanding?”

“Uh…where is it?” Qwerty mumbled.

Edison leaned over, cupping a hand around his right ear and placing that ear almost against Qwerty’s mouth. Qwerty remembered learning in school that Edison was almost totally deaf. Qwerty also realized something they never taught him in school—Thomas Edison had bad breath and body odor.

“You work your articulating apparatus so weakly I can’t make out a word you’re saying!” Edison shouted at the boy. “Go to the supply room, pinhead!”