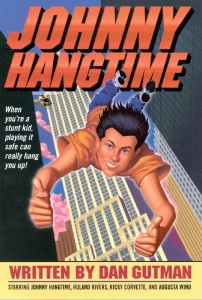 The wind was whipping up off New York Harbor, and I waited for it to settle down. The hardest part about being a stuntkid is the waiting. Once I’m ready to begin, I’m able to wipe everything else out of my mind and focus on what I have to do. But as I stand there waiting I start thinking, “Am I crazy? Have I totally lost it? What am I doing up here?”

We had already shot the scene where I climbed down a rope ladder from a helicopter onto The Statue of Liberty’s head. My job now was to climb inside a window on her crown, grab the bomb, climb back out and fling the bomb as far as I could into the harbor.

The wind was beginning to die down. I paused to take a deep breath. Liberty was flooded with lights, and I looked down to get a view of her that very few people have ever seen. Her head was about ten feet across, but I had to be careful not to wander too close to the edge or I’d fall off.

I got down on my hands and knees and eased myself backward into the window of the crown. I grabbed the fake bomb and climbed back out the window.

There are seven spikes sticking out of Liberty’s crown. Roland, who knows just about everything about everything, told me they represent the seven continents and seven seas. The script called for me to climb out on the spike directly above Liberty’s right eye and heave the bomb off. That’s what I did.

The blast set off by the pyrotechnic guys was bigger than I thought it would be. I could feel the heat and hot air from the explosion. It made me stagger back a bit, which was fine because it would make the scene look more realistic. Next, I had to fall.

The Statue of Liberty is 151 feet high from toe to torch. Her head is lower than the torch, so it’s about a 100 foot drop from the crown. Then there’s the base of the statue, which is 65 feet high itself. So I was looking at a 165 foot free fall. No helmet. No parachute. No bungee cord. No hidden wires. No nothing.

A hundred and sixty five feet isn’t so far, really. I’ve done it plenty of times. It’s over before you know it. 300 feet is far. When you’re about to make those 300 foot falls, that’s when you wonder if you’ve seen your last sunset, eaten your last meal, hugged your mom for the last time.

Just like with the Empire State Building gag, we used an air bag to cushion my landing. The bag below me on Liberty Island was made of nylon and about the size of a large swimming pool. There are vents called breathers on the sides. When you hit the bag, air is forced out the breathers so the stuntman doesn’t get hurt.

That is, if you hit the airbag. If you miss it by a foot, you could break every bone in your body. Naturally, you’ve got to aim for the center of the bag. You do that the instant you jump. Human beings aren’t like cats. We’re not very good at mid-course corrections.

It’s important to learn how to land correctly. You can’t land feet first, because the impact will snap the large bones in your legs like twigs, or drive them into your pelvis. Also, if you land on your feet and bend your knees, there’s a good chance your knees are going to come up and smash you in the face, which is no fun at all.

For a front fall, the trick is to keep your head down and eyes on the landing spot. At the last instant, you pull your head up and spread your body out. You never want to fall with a forward somersault, because you might break your neck. Rolling on one shoulder is okay. This is called a stunt roll. It spreads the impact across your whole body instead of putting it all on one part.

But the script called for me to do a back fall. This is harder than a front fall because you can’t see the airbag. You have to trust your instincts. I staggered back off Liberty’s spiked crown and gave a little push with my toe to clear the statue. All was silent, but within a second the rush of air whistling by me roared in my ears.