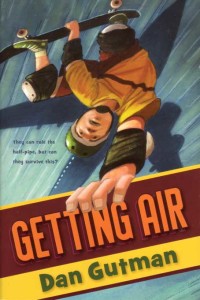 For a moment, David, Henry, Julia, and I just looked at each other. The pilot was dead. The co-pilot was dead. All four hijackers were either dead or close to it, laid out on the floor in the cabin behind us. The only people who knew how to fly an airplane were out of commission.

“Do you know anything about flying?” I asked Arcadia. I figured a flight attendant might have picked up a thing or two in her work.

“No!” she replied. Then she called out to the old ladies, “Does anybody know anything about flying?”

“Goodness no!” one of them said.

A few of the others started praying again. Nobody jumped up and offered to take the controls.

“This is Greek to me!” Henry said, his voice rising in panic. He was just sitting there staring at the controls.

“You must have learned SOMETHING,” David begged Henry. “Think!”

I couldn’t blame Henry for freaking out. The dashboard or control panel or whatever it was called looked like it had a hundred dials and gauges and switches all over it. How could ANYONE know what they all did? Some of the glass covering the dials and gauges had been broken in the fight. Some had blood on them. You couldn’t even see through them.

“Okay, calm down, Henry,” David said. “Do you remember any of the basics, like how to make the plane go up and down, left and right?”

“Yeah,” Henry said, taking a deep breath. “The plane flies straight and level if you don’t do anything. You pull on the yoke to go up, and you push it forward to go down. Same with left and right.”

I didn’t even know what a yoke was, but Henry pulled on some dohickey in front of him that looked like a video game joystick and I could feel the plane tilt up a little.

“That’s good, Henry,” David said, putting a hand on his shoulder. I knew he was trying to be positive and comforting. Henry was going to need our support.

“Can you land it?” David asked.

“How should I know?” Henry said, his voice rising again.

“Where would I land it anyway?” Henry asked.

It was a good question. We all looked out the window. The plane was pretty low. There was nothing but trees and lakes down there. If there was a highway, maybe we could land on it. But there wasn’t. I couldn’t think of any part of the United States that hadn’t been carved up by strip malls and fast food joints. Maybe we were wrong when we thought we had turned back toward the East Coast. Maybe we were flying over Canada.

“The sun is to the right of us,” Julia said. “That means we’re heading north.”

“How do you know?” asked David.

“Girl Scouts,” she replied. “The sun rises in the east and sets in the west.”

Julia has been a scout since she was five. I dropped out of Boy Scouts as soon as I took up skateboarding.

Arcadia came back into the cockpit to check up on us. “ Did you figure out how to make the radio work?” she asked.

The radio! Of course! We could radio somebody and they could “talk us down.” I saw somebody do that in a movie once.

It hadn’t even occurred to me. Henry picked up a headset. He fiddled with it and yelled “Mayday! Mayday!”

“It’s busted,” he said, “and I think they disabled the transponder.”

“It’s like a receiver that tells the air traffic controllers where we are,” Arcadia told me.

“So we’re not a blip on some air traffic controller’s radar screen?” David asked.

“What about fuel? Maybe we can keep flying until we find a better place to land.”

We hunted all over for a fuel gauge. There were a few of them on the lower part of the instrument panel. I guess they have more than one fuel tank. The needles were close to empty.

That didn’t make sense. The plane was heading for California. How could it be low on fuel?

“Maybe the hijackers dumped the fuel,” Arcadia said. “You can do that in case you need to get the weight down in an emergency.”

“Maybe the PILOT dumped the fuel as soon as the plane was hijacked,” Henry suggested. “ That way, the hijackers wouldn’t be able to reach their target.”

“It doesn’t matter who dumped the fuel,” David said urgently. “ We gotta land this thing soon or we’re just gonna run out of gas and go down wherever we are.”

He was right. And right after he said that, it suddenly got quieter in the cockpit and the nose started to dip even though Henry hadn’t pushed on the yoke.

Henry looked out the left side. “The engine isn’t turning!” he shouted.

“Maybe the trees will cushion our fall,” Julia said, “Like shock absorbers.”

“Yeah, hitting a tree should be real gentle,” David said.

“The other engine stopped!” Arcadia shouted, looking out the right side.

We didn’t need her to tell us. There was a strange and eerie quiet suddenly. After a while you don’t notice the constant hum of an airplane’s engine. But when it stops, it’s like you’re alone in the woods in the middle of the night. It felt like we were moving more slowly.

The nose tilted down a little more. The treetops were suddenly bigger in the window.

“Pull it up, Henry!” David shouted, tapping the fuel gauge with his finger. “We’re losing altitude!”

Henry pulled the yoke back and the nose went up a little, but not all the way to level.

“So can you glide it down?” David yelled. “Try to steer it between the trees!”

“It’s so heavy!” Henry said, still pulling on the yoke like he was in a tug-of-war.

The trees were getting bigger and bigger, rushing past us. There were trees everywhere. It didn’t look like there was any room between them. We had to hit them. We were going awfully fast.

“Brace yourselves against something!” Arcadia yelled.

We probably should have gotten out of the cockpit. We should have run to the back, let the front of the plane hit the trees, and hope to get out alive after the plane broke apart. That would have been smart. But there was no time. We weren’t thinking straight. And we couldn’t stop looking at the trees coming at us. We were frozen.

The tops of the trees licked the underside of the plane and there was this eerie scraping noise as they bent against it. Somebody screamed. We were falling into the forest. I saw the nose ram right through the middle of two thick trees. There was a jolt. The sound of metal ripping apart. A rush of air. More screams. The smell of something burning. Tree trunks flying past us. Getting knocked off my feet. My head hitting something.

And that was the last thing I remembered.