The Kid Who Became President 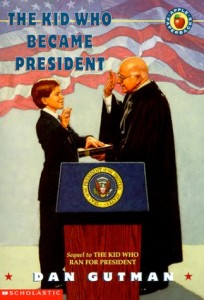 The room was nearly bare, with just two chairs and a table with a pitcher of water and two glasses on it. There was an intercom that would let us call the captain if we needed anything. I felt around the drapes to make sure there weren’t any hidden listening devices. When I was satisfied, I sat down and rehearsed what I was going to say to Trujillo.

He showed up a few minutes later, escorted by the captain. Trujillo was wearing a military uniform with lots of ribbons and medals dangling off it like Christmas tree ornaments. They didn’t impress me.

“So we meet again, President Moon,” Trujillo said, a cocky tone in his voice. He didn’t stick out his hand, and neither did I.

“Lock the door,” I instructed the captain.”We’re not coming out of this room until we reach an agreement.”

With the room sealed, Trujillo and I stood face to face. He was a short man, but was still a few inches taller than me. “It is time to separate the men from the boys, President Moon,” he sneered.

“I could just kill you now. Do you realize that?”

“Mr. Trujillo,” I said, “I didn’t come here to separate anything. I came here to bring us together.”

“Bring us together? Ha!” he snorted. “You only came here to protect your precious oil. Without your planes and guns and bombs–”

“Forget about planes and guns and bombs,” I interrupted. “I have a proposal for you. A simple proposal. Either listen to what I have to say, or the United States will take military action against Cantania.”

“What proposal could you possibly have that would interest me?”

“I always thought it was stupid that soldiers have to die in wars when it’s the rulers who have disagreements,” I explained. “Wouldn’t it make more sense if the leaders of the two nations simply fought it out among themselves?”

“Are you suggesting that you and I fight?” Trujillo said with a laugh.

“Yes!” I said. “You and I fight. Right here in this room. If you win, you can go ahead and invade Boraguay. America won’t interfere. And if I win, you pull back your troops and never bother the people of Boraguay again. Either way, no bombs are dropped. No bullets are fired. Nobody has to die.”

“Good,” he said, rolling up his sleeves. “Instead of fighting a war, we will arm wrestle.”

“No,” I said. “You’re obviously much stronger than me. It has to be a fair fight.”