Race for the Sky 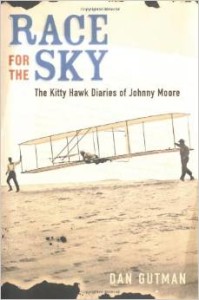 I said I was gonna rite about the mouse, so now I’m gonna rite about it. While we was workin, this mouse was a-runnin ‘round the shed. A brown little critter. It didn’t bother me none. Me and mama got lots of mice at home and we don’t pay ‘em no mind. But Mr. Orville was tormented powerful by the critter. He would chase it ‘round the little kitchen with a hammer, but the bugger always managed to escape through the cracks in the floorboards. Me and Dan Tate had a good laugh over it. Mr. Wilbur says that Mr. Orville has MUSOPHOBIA, which he says is a fear of mice. He even spelled it out for me so I’d get it right.

Anyways, the mouse weren’t mommickin nobody, but Mr. Orville decides he’s gonna invent a mousetrap and capture the thing. Seemed to me he would be better off inventin his flyin’ machine and beatin that Langley feller, but what do I know?

Mr. Orville took a whole afternoon and built a trap. It was a wondrous wooden thing with a steel spring that any respectable mouse would be proud to be caught in. Mr. Wilbur says the design is better’n their glider and they should put wings on the thing to see if IT will fly. I reckon that was a joke, but I never heard Mr. Wilbur joke afore so I wasn’t sure.

I told Mr. Orville that mice like to eat cornbread, so he slipped a piece in for bait. Then we all sat ‘round after supper waitin for the critter to come to his last party.

Nothin doin. The little feller must of had a previous engagement. I knew he’d come soon and I didn’t want to miss the fun, so I asked Mr. Wilbur if I could sleep on the floor and he says sure.

Afore we went to sleep, two interestin things happened. First, Mr. Wilbur took his teeth right out of his mouth! Turns out he got busted up playin hockey when he was 18, and he had to wear fake teeth ever since. Then, I spy Mr. Orville rubbin lemons all over his face. I say what are you doin and he says the sun makes his skin dark so he bleaches it with lemon juice. I never heard of a man bleaching his skin to look good, but I guess it takes all kinds.

Anyway, I sat ‘round watchin for the mouse a whit, but I got tuckered and fell asleep.

Then, in the middle of the night I hear a SNAP and we all wake up. Mr. Orville hops out of his bed and runs to check the trap. Empty. The little critter must of run off with the cornbread. Mr. Orville was plenty sore. We go back to sleep and not more than five minutes later, Mr. Orville wakes up screaming.

“The mouse ran over my FACE!” Mr. Orville shouts.

I had to laugh. How he managed not to let out a cuss word, I’ll never know. Maybe he don’t know no cuss words is all I can figure, cause he was powerful sore.

“Maybe the mouse wanted to tell you he wants another piece of cornbread,” Mr. Wilbur says, going back to sleep.

Well, Mr. Orville is so mommicked he can’t sleep. He lights a lantern and picks up a piece of wood about a foot long.

“What are you gonna do with that?” I ask.

So he is stalkin ‘round with his piece of wood, mouse hunting for a few minutes. Suddenly, I spy the little feller in the corner, cute as a button, his eyes shining in the light of the lantern. Mr. Orville sees it too and he chucks the wood at it. He misses, but he does hit something–a teacup that Dan Tate must of left on the floor. Pieces went flyin’ all over.

“Orv, control yourself!” Mr. Wilbur says. But now Mr. Orville is REALLY mommicked. He grabs the shotgun from the rack and aims it at the spot in the corner where we seen the mouse last.

“It’s going to be a little DEAD mouse,” Mr. Orville says, without takin his eye from the sight.

Sure enough, the critter pokes his little head out of that spot again and Mr. Orville mashes the trigger. BANG!

Well, I reckon he got it. Couldn’t say for sure, cause there was no body to speak of. Just some bits of fur and blood scattered acrost the floor.

Anyways, that mouse didn’t bother us or nobody else the rest of the night.

Don’t that beat all?