Many people seem to think that authors who have published a book (or two, or twenty), don’t experience much rejection. Well, I’ve been rejected HUNDREDS of times, and I thought you might enjoy reading a few of my rejection letters. 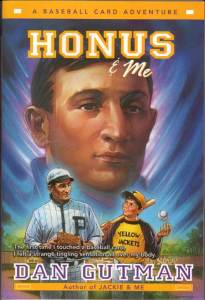 In the winter of 1993, I wrote a book which I titled Honus & Me. It was the story of a boy who finds the most valuable baseball card in the world, a 1909 Honus Wagner. He also discovers he has the power to travel through time using baseball cards like a time machine. He uses his priceless card to travel back to 1909 and go on an adventure with the great Honus Wagner. When I finished writing the book, I felt I had something very special. In fact, I felt that it was the best book I had written. I didn’t think I would have any trouble finding a publisher for it.

At the beginning of 1994, I sent Honus & Me to Publisher #1. (I’m not going to mention the names of the publishers who rejected the book because I don’t want to embarrass them.) Publisher #1 took about two months and then rejected it. I don’t have the rejection letter anymore. Maybe I ripped it up in frustration. I seem to recall that they considered the plot too farfetched. I sent the manuscript to Publisher #2. They also took two months to reject it (publishers often take longer to read a book than it took the author to write it). I believe they rejected with a phone call. I sent the manuscript to Publisher #3. This is the letter they sent me on May 10, 1994.

“Thanks for sending Honus & Me. I enjoyed the baseball connection, but don’t think this is for me. I don’t think the first person narration works, and the plot seems too predictable-not a story that could succeed on our fiction list. So I am returning the manuscript to you, and wish you every success with it elsewhere.”

“Thank you for sending us Honus & Me. Several of us have read it, and we enjoyed the story and your writing style. However, I’m afraid we had some problems with the structure of the manuscript. The double time travel (Honus traveling to the present, Joe traveling to the past) seems to stretch credibility too much-it seems to us that having just Honus come to the present or just Joe go to the past would make the storyline stronger and tighter. Also, it was hard for us to believe that Joe could impersonate Honus and play in the World Series-wouldn’t everyone realize he was just a kid?
(Note: They must not have read the book too closely. When Joe goes back in time, he becomes a grown man.)

“I regret that these structural flaws prevent us from making an offer on Honus & Me. However, if you are willing to revise the manuscript, we would be interested in taking another look at it.”
Several of the publishers pointed out inconsistencies in the manuscript. I was aware of them, but I thought kids would overlook them and just enjoy the story. However, publishers were obviously bothered by them, so I made some minor revisions and sent the manuscript back to Publisher #2 for a second look. They sent me this letter on November 21, 1994.

“Thank you for sending us Honus & Me. I’m sorry to say that the novel still doesn’t work for us. We found two big problems with the story. One was the lack of tension in the manuscript now that you have removed the subplot of the schemes to steal the card from Stosh. There doesn’t seem to be any particular urgency to Stosh’s or Honus’s quest now, and there isn’t enough going on to compel the reader to keep turning the pages.
“In addition to the tension level of the plot, the writing also seemed flat. The moments of excitement or sentimentality that should really grab the reader just don’t–instead these moments are presented in much the same tone as the rest of the narrative. Even the time travel theme is treated much too matter-of-factly. There is none of the astonishment and thrill that you would expect from characters who suddenly find themselves doing the impossible.”

Whew! That hurt. I was discouraged, but in the back of my mind I believed they were wrong. I made a few more revisions and sent the manuscript to Publisher #3 again. This is the letter they sent me on December 1, 1994.

“I have reread Honus & Me and it seems almost exactly like the first draft. The story works well for me up to page 35. Then comes that long talky scene with Honus. I really don’t think kids will find this as fascinating as adults do. And I still think it’s a mistake to have Joe become a man in the time warp sequence. This is still not convincing. I don’t think a kid would slip into a man’s body so comfortably so fast. It’s an interesting idea to explore, but much more needs to be done with it.

I think you need to move right into the action and get Joe and Honus together in 1909 fast, rather than have all this exposition. I’m also feeling a bit uncomfortable about the switch of Joe for Honus; it’s a bit underhanded of Honus and makes him less sympathetic to the reader. I really feel some more thought needs to be given to the whole 1909 section of the story.

“I was just reading about what a terrible person Ty Cobb was; maybe in this story he could be doing something mean that would keep Honus out of the game, but then when Joe shows up from the future, he is able to take care of the problem and because of him, all goes as it should according to history. (Sort of like Back to the Future Part II.) That way Joe could remain a kid and still have an impact on baseball history. I’m sorry this still doesn’t work for me. It may be fine to someone else, and I wish you the best of luck with it.”

I totally disagreed with this criticism and didn’t make any more changes. Instead, I sent the manuscript off to Publisher #5. They sent me this letter on January 25, 1995…

“Thank you for sending Honus & Me. Although we were interested to read it, we do not think it is right for Publisher #5. The premise of the story was very intriguing, but we felt it was overshadowed by the historical information regarding Honus, which made Stosh’s story less compelling, as well as Amanda Young’s. Thank you for letting us read it, and we wish you the best of luck placing it elsewhere.”
Getting progressively more frustrated, I sent the manuscript to Publisher #6. They wrote this to me on March 3, 1995.

“I’m sorry to be the bearer of bad news. Many of us agreed that you have hit upon a strong concept for a time travel/sports novel, but felt the manuscript needed too much work at this point to warrant our signing it up. I would like to pass along some specific comments, in the hopes that you will be interested in revising and trying us again. The greatest concern voiced was that certain aspects of the time travel were not treated consistently or explained logically. Too many holes in a time travel scenario wind up shattering the believability of the novel as a whole, so these questions should be your first concern.
–Why did Honus appear to Stosh before Stosh had found the baseball card.
–Why did the card disappear when Honus appeared in Stosh’s room? If the card is the “gateway” between past and present, wouldn’t Stosh need it in his hand in order to transport back in time?
–Why did Stosh become a man when he returned to the past with Honus?
–If the card is the ticket to the past, then the torn picture of Amanda and Honus shouldn’t be able to do the same thing.”

Again, these publishers seemed hung up on the fact that certain things in the story didn’t make perfect logical sense. My response to that was that IT WAS A FANTASY! Did Alice in Wonderland make sense? Did James and the Giant Peach make sense? Did The Wizard of Oz make sense? Anyway, I sent the manuscript to Publisher #7. They sent me this letter on July 5, 1995.

“Enclosed please find the return of Honus & Me. Everyone felt that it was quite well done and were impressed with your voice and style. However, the consensus was that the market appeal would be too narrow for us to publish it successfully. With regret, I’m afraid we must pass, but would be glad to see any of your future work.”

Fifty million people go see baseball games each year, but the market appeal is too narrow? Go figure. While I was still convinced the story was solid and kids would love it, I couldn’t help but have some doubt about my own judgement. Maybe all these editors were right. Maybe the story didn’t hold together. Around this time, I started looking seriously into the idea of self-publishing the novel. That is, bypass a publishing company entirely and publish the book MYSELF. I looked into this carefully, and decided that while I didn’t want to be a publisher, I would do it if no publishers wanted the book.

In the meantime, I sent Honus & Me off to Publisher #8, HarperCollins. I can tell you their name because… THEY LIKED IT! My wonderful editor, Stephanie Siegel, loved the book and said HarperCollins would like to publish it. Needless to say, I was thrilled.

Honus & Me came out in the Spring of 1997. All those editors had problems with it, but the book received excellent reviews, was nominated for eleven state book awards, and was selected by the children of California as their favorite book of the year. Publisher’s Weekly called it a “joyfully entertaining yarn.” Kirkus Review said it was “a good fantasy for any baseball fanatic… delightful story… thoroughly researched…” The Newark Star Ledger said the book was “a delightful tale.” The Chicago Tribune called it, “a captivating blend of fact and fantasy.” Kids loved the book too, and I have yet to hear a single reader mention that certain elements of the story don’t make sense. They realize it is a fantasy and fantasies are supposed to be… fantastic!

Best of all, just about every day I receive a letter like this one:

“Dear Mr. Gutman,
I would like to share an experience I had with a group of third grade reluctant readers last week. As a small group of five, we have been reading Honus & Me. One child, Luis, was assigned two chapters, but read the entire book overnight!!! I then went out and bought Babe & Me and actually had Luis begging me to borrow it, even though it wasn’t catalogued into the library system. His mother reported that Luis has NEVER been a reader, but the other night he came into her room and reported that something “strange” was happening to him!!! He was reading Babe and Me, put it down to watch his favorite TV show and then-–the book started “calling” him. We are not sure if he thinks the book is possessed or realizes that he is possessed with your book and reading! You have made a difference in a child’s life!
Jonie Fitzsimmons
Mountainside Elementary
Fort Carson, Colorado”

Here’s what I learned in the three years it took me to get Honus & Me published: