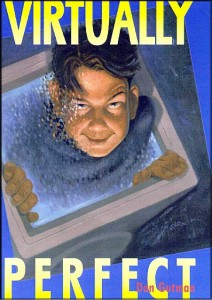 When I opened the front door that afternoon, I didn’t immediately sense anything wrong. It had been a long day at school. I was beat. I just wanted to grab a snack and veg out in front of the tube for awhile before tackling my homework. My parents were still at work and my sister wasn’t home yet. I wasn’t sure where Grandpa Leo was.

“Yip,” a low voice groaned when I stepped into the front hall. “Yip!” My real name is Lucas Turner, but at home everybody calls me “Yip.” You see, my Dad and Grandpa Leo have always been in the movie business. Dad named me Lucas in honor of George Lucas, but Grandpa wanted me to be called Willis, like my Dad. Willis O’Brien was the guy who created the ape for the original King Kong back in 1933. Grandpa idolized him. But Dad always hated being named Willis, and he refused to name me Willis Jr.

It was my Mom who settled the dispute by nicknaming me “Yip.” Yip Harburg was the guy who wrote the words to the songs in The Wizard of Oz. That’s her favorite movie.

I almost stepped on a big, red, wet footprint on the tile floor of the hallway. Ketchup? Paint? Blood? Quickly, I followed the footsteps toward the kitchen.

Grandpa Leo was laying there, face down. There was blood smeared on the floor all around him. My cat, Freddy, was sniffing him. A long knife handle stuck out of Grandpa’s back, just below the shoulder blades. I was rocked. I almost didn’t notice Grandpa’s hand. It was detached, on the floor, a few feet away from the rest of him.

“Ahhhhhhhhhhhh!” I didn’t try to scream. It just came out of my throat involuntarily. Freddy yowled and dashed out of the kitchen.

I reached for the wall phone to dial 911. I punched in the “9” and was about to punch in the first “1” when Grandpa Leo suddenly leaped up off the floor and grabbed the phone out of my hands.

“Stop!” Grandpa shouted. “What are ya tryin’ to do, Yip? Get us in trouble? 911 is only for emergencies!” Then Grandpa broke up laughing.