Coke and Pepsi McDonald are a perfectly ordinary twin brother and sister on a cross-country RV trip with their parents. Except for one thing–they are also being chased by a bunch of psychos who are trying to kill them as they stop along the way at The National Yo Yo Museum, The Spam Museum, and various other offbeat tourist attractions. Who is trying to kill the McDonald twins, and why? You’ll have to read The Genius Files to find out. This will be way more exciting than any summer vacation you’ve ever taken. 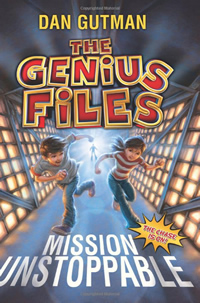 Book 1: The most exciting road trip in history begins! In this action-packed, New York Times bestselling adventure, twelve-year-old twins Coke and Pepsi McDonald embark on a family vacation you’ll have to read to believe.

With the real-kid humor that has earned Dan Gutman millions of fans around the world, and featuring weird-but-true American tourist destinations, The Genius Files is a one-of-a-kind mix of geography and fun. As Coke and Pepsi dodge nefarious villains from the Pez museum in California all the way to the Infinity Room in Wisconsin, black-and-white photographs and maps put young readers right into the action. And don’t miss the next leg of the journey in The Genius Files: Never Say Genius! 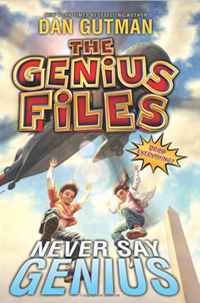 Book 2: Coke and Pepsi McDonald never asked to be geniuses. They never asked to get lowered into a basket of boiling French fries, either. And they certainly never asked to be frozen in soft-serve ice cream, stampeded in a wild stadium riot, or kidnapped on a high-speed roller coaster. But that’s what happens when a red-haired villain named Archie Clone is chasing you across America. This just might be the most dangerous road trip in history—and the most awesome!

Want to join in the fun? Fire up the old Google Maps and follow the McDonald twins as they get chased from the National Mustard Museum to the Rock-and-Roll Hall of Fame. And whatever you do: never say genius! 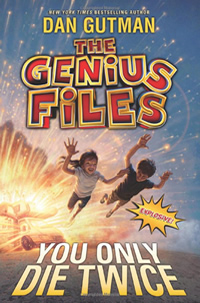 You Only Die Twice

Book 3: Twins Coke and Pepsi McDonald dodge nefarious villains all the way to Graceland. With the real-kid humor that has earned him millions of readers around the world, and featuring all new weird-but-true locations around America, this third book in the New York Times bestselling Genius Files series is one wild ride!

The genius twins Coke and Pepsi have narrowly escaped a vat of a Spam, a pit of boiling fry oil, and a score of crazed adults all bent on killing them. But just when they thought they were safe, their arch nemesis Dr. Herman Warsaw reappeared, engaged to their Aunt Judy! Whoa—didn’t he die already?! Now, as the twins continue their family road trip from Washington D.C. through the South, it will take every bit of their genius abilities to outwit their wacky enemies. 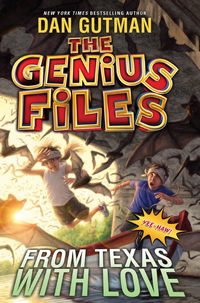 From Texas With Love

After their explosive escape at Graceland, twins Coke and Pepsi are ready to resume their trip across America—only now in a convertible instead of the RV. They travel through Arkansas and Oklahoma, visiting weird-but-true tourist stops along the way, and finally end up in Texas, home of the Weird Capital of the Country, Austin. The twins’ many enemies—the bowler dudes, Mrs. Higgins, and Dr. Warsaw—all swear that they’re done chasing Coke and Pepsi for good. But when the twins start receiving more codes and ciphers from a mysterious robotic voice, they know someone’s after them. They just have to figure out who before the mystery villain finds them first. 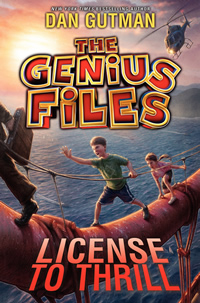 When we last left our heroes, twins Coke and Pepsi McDonald were in Roswell, New Mexico, and they had just seen a strange beam of light. Now their cross-country road trip is about to take a detour that’s out of this world—literally!

Once the twins get their feet back on the ground, they embark on the final leg of their trip, which will take them from the Hoover Dam all the way to the Golden Gate Bridge. Chased by nefarious villains, the twins will be trapped with a venomous snake, pushed through a deadly turbine, and thrown into a volcano. And craziest of all, their parents might finally believe them!